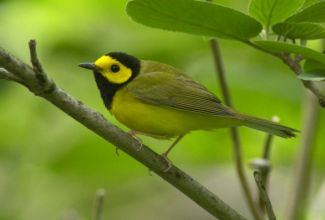 Over 80 species of birds are part of the forest ecosystem. Their vast diversity includes birds of many shapes, sizes and colors, from woodpeckers to hummingbirds, whip-poor-wills to warblers and turkeys to thrushes. Birds play significant roles that are necessary for healthy ecosystem function. Insect-eating birds control pests that would otherwise decimate agricultural crops and natural vegetation. Other birds scavenge carcasses and metabolize disease to remove it from the system. Others assist with dispersing seeds that would otherwise not fall far from the tree or plant, and they also act as pollinators. In addition to these systematic roles, birds are one of life’s more beautiful pleasures enjoyed by humans. Millions of people around the world enjoy watching and feeding birds; they are a gateway for many to learn more about the outdoors and nature.

Birds are also indicators of ecosystem health and relatively easy to monitor – one of the reasons why MOFEP bird monitoring has been conducted annually since the project’s inception in 1991. Despite the vital roles of birds and their enjoyment by millions, most North American bird species have experienced significant declines over the last few decades. In fact, a landmark article in the journal Science quantified net population loss of North American birds and found a loss of 2.9 billion birds, or 29% of North American birds, since 1970.

Why the declines? The transient and/or migratory nature of most bird species and their ability to quickly adapt to changing environments­ due to the mobility of flight make pinpointing exact reasons quite difficult. Common causes discussed by the ornithological community include large-scale land-use change, habitat­­­­­­­­­ modification and loss, the effects of widespread pesticide use on insect prey, climate change, and lack of necessary land management practices.

MOFEP allows researchers to track bird populations’­­ response to forest management. Fifteen of the 29 species included in the Missouri Bird Conservation Plan are shrub-nesting birds that require disturbance management, including tree harvesting and/or prescribed fire, to maintain the early-successional habitat structure they need for breeding. Long-term studies like MOFEP allow us to monitor potential large-scale changes in bird populations while studying the effects of forest management.

Bird Crew: Stories from the field 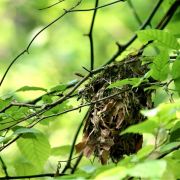 Learn more about one technician's experience during summer bird work!