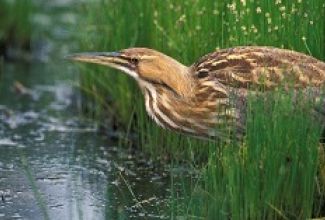 A reoccurring question among MDC managers and administrators alike is to what extent does MDC wetland management provide for the life history needs of wetland species? Missouri is among the mid-latitude states that serve as the main migration corridor for migratory waterbirds. This region has lost a higher proportion of their wetlands than most locations in the country. Most remaining wetlands are found in a highly altered landscape where the timing, magnitude, and duration of flooding no longer provides the quantity, quality, and diversity of habitat that once existed and were used by migrating waterbirds. Now, wetland managers in mid-latitude states face the challenge of trying to emulate system processes to provide for the life-history needs of the full suite of wetland-dependent species on a very limited number of wetlands. As a result, managers must implement water and wetland management practices beneficial to a wide range of species, while recognizing the trade-offs involved that may benefit some species at the expense of others.
One challenge that wetland managers must contend with is the varying levels of knowledge regarding the life history needs of different wetland species groups and how management actions affect these needs. In the case of waterfowl, researchers have developed models to determine habitat requirements during migration and the influence of management on meeting energetic demands. In contrast, much less is known about how management actions influence habitat requirements and resource selection of most other wetland dependent species in Missouri including fish, amphibians, shorebirds, wading birds, and secretive marsh birds. In 2012, we initiated two companion projects focused on a a group of wetland dependent migratory birds collectively known as secretive marsh birds (SMB). SMBs encompass a group of wetland dependent birds including rails, bitterns and moorhens. Extensive wetland habitat loss throughout the United States is believed to have contributed to the subsequent decrease in geographic range of many SMB species. In addition, SMB are generally inconspicuous and tend to inhabit wetlands with dense vegetation making them difficult to detect. Overall, limited distributions combined with low detection probability have resulted in SMBs being among the least studied bird groups. For most species, there is limited information on population levels, breeding ecology, migration patterns, and overall habitat requirements. We investigated this question with two research projects; one conducted during the spring migration and summer nesting period and the other carried out during the autumn migration period. 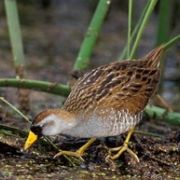 Study to evaluate wetland water management practices on the presence and nesting behavior of secretive marsh birds in Missouri. 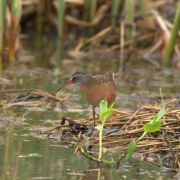 Several secretive marsh bird (SMB) species are both migrants and breeders in Missouri. The degree to which individual birds stay to nest in Missouri versus continuing north to breed is unknown and has resulted in uncertainty regarding the role of Missouri’s wetlands for this group of birds. One key uncertainty identified by many Department wetland managers is whether their management actions are emulating wetland processes that enable SMBs to fulfill their life history requirements while in Missouri.

Several secretive marsh bird (SMB) species are listed as “Critically Imperiled” in Missouri; however, little information exists on SMB distribution and habitat use within the state. As a result, wetland managers are uncertain as to how much SMBs use Missouri wetlands and the wetland processes they need to emulate in order to provide habitat for this guild of species. For this Science Note, we focus on the migratory SMBs.

Monitoring and conserving waterbirds in Missouri, including Sora (Porzana carolina), Virginia Rail (Rallus limicola), and Yellow Rail (Coturnicops noveboracensis), are constrained by the lack of information on migration phenology. Understanding the timing of a species’ migration is as important as knowing the species’ habitat needs and stopover ecology. Awareness regarding the time of year that habitat is needed is vital to inform habitat management, especially in highly ephemeral habitats such as palustrine emergent wetlands.