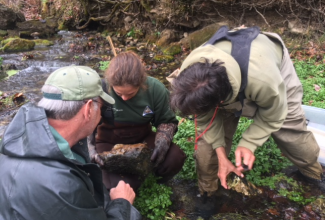 Maramec Spring is home to two Ozark endemic caddisfly Species of Conservation Concern (SOCC). The Missouri Glyphospsyche Caddisfly, Glyphospsyche missouri, (Critically Imperiled; State Rank-S1; Global Rank-G1) is known from Maramec Spring and the receiving spring branch and nowhere else in the world. Similarly, the Artesian Agapetus Caddisfly, Agapetus artesus, (Vulnerable; State Rank-S3 and Global Rank-G3) is known to occur only at Maramec Spring, Greer Spring, and a single reach of the Eleven Point River. Both species are considered representative fauna of Caves/Karst (Springs) habitat systems described in the Missouri State Wildlife Action Plan. However, little is known about distribution, life history, environmental requirements, or tolerance to environmental stress of either species. Further, prior to this study, it had been 14 years since G. missouri was last recorded to occur at Maramec Spring or the receiving spring branch, and 29 years since A. artesus was last documented to occur at Maramec Spring. On 15 November 2017, a team conducted reconnaissance of Maramec Spring Branch and of the Meramec River immediately downstream from the confluence of the spring branch to document occurrence and characterize aquatic habitat of immature life-stages (larvae and/or pupae) of the species, if found. A second visit was made on 10, January 2018.

Our efforts reaffirmed that populations of G. missouri and A. artesus persist in the Maramec Spring Branch. We also were able to begin to fill in gaps in the knowledge of the habitat use of the early life stages of these species and provided the first documentation of the G. missouri larval diet.

Continued efforts to conserve and protect habitat combined with detailed studies of distribution, life history, and environmental requirements of of these species are needed to direct management of spring habitat systems as identified in the State Wildlife Action Plan and the MDC's Comprehensive Conservation Wildlife Strategy, and to ensure maintenance of sustainable populations.

Science Note Vol 14, No 1 (2019) that describes a study to determine the current status of two caddisfly species of Conservation Concern in the Maramec Spring Branch.