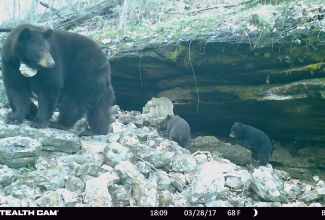 Black bears are an important resource in Missouri for their value as a game species and their contributions to regional biodiversity and ecosystem health. However, bears may also be regarded as a nuisance by the general public. Therefore, it is imperative to have management strategies in place to ensure sustainable population levels while minimizing conflicts with humans and assuring public safety. The Missouri Department of Conservation (MDC) has identified regulated hunting as part of its management strategy to maintain a viable black bear population compatible with habitat and human tolerance. Implementation of effective harvest strategies requires sound information on black bear demographics including abundance, sex ratios, population growth rate, and spatial distribution emphasizing resource use across Missouri.

Initial population research, which began in 2010, suggested a 2012 statewide estimated population of just under 300 bears. In order to model statewide bear numbers and estimate population trajectory, MDC began a project to measure reproductive and survival rates of female bears in Missouri. This black bear population model is used to predict growth and trajectory of Missouri’s black bear population. An updated population estimate derived in 2019 determined that Missouri is home to approximately 540-840 black bears and the population is growing approximately 9% annually. Other research objectives include measuring black bear habitat use and movement patterns, identifying suitable but unoccupied habitat and to delineate travel corridors that link large tracts of suitable bear habitat in the state. Additionally, fine-scale habitat use and corridor information will be used to help prioritize areas within the state for targeted outreach and education. All research results will be used to inform management decisions related to Missouri’s black bear population.

Since the initiation of the Missouri black bear research project in 2010 through 30 June 2019, MDC has marked over 200 black bears and has deployed collars on over 100 bears.

A slideshow of trail camera footage from bear dens in 2017.

Explore maps, photos and videos about Missouri black bear and the research that we are conducting.

Publication citations that resulted from data collected during various stages of the Missouri Black Bear Project.