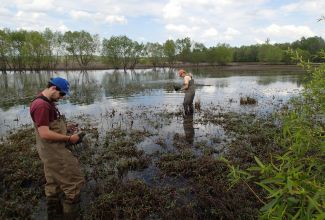 Although many avian species can be observed using wetlands from a distance, the taxa below the water's surface can be much harder to document. This includes the wide array of fish, amphibians, reptiles, and aquatic invertebrates. Knowing how best to monitoring these species assemblages to inform management decisions is limited. In the past, research typically has only focused on one taxonomic group like fish or just amphibians. These projects have looked at one taxonomic group or another in different parts of Missouri. However, both taxonomic groups occur simultaneously within floodplain systems and can be caught with similar gear. Unfortunately, there hasn’t been a comprehensive evaluation of the most efficient and effective gear type when sampling these seasonally inundated habitats. Most recently the University of Missouri and Missouri Department of Conservation conducted research that took the next step in reducing the amount of uncertainty when sampling aquatic communities by addressing the following: 1) Assess efficiency and effectiveness of a variety of sampling methods to determine probability of presence and species richness of amphibians and fish in MDC wetlands 2) Quantify effects of region, season, and habitat complexity on detection probability for amphibians and fish in MDC wetlands and 3) Recommend standardized assessment protocols for use by MDC wetland area managers to evaluate amphibian and fish response to wetland management decisions.
This study sampled 29 wetlands across three ecoregions in Missouri to compare the effectiveness of four aquatic sampling gears (mini-fyke nets, minnow traps, dipnets, and seines) to detect fish and amphibian species. The influence of method, temporal (spring and summer of 2015 and 2016) and regional variation, and sample site habitat on the number of fish and amphibian species detected was evaluated. Major findings of the study indicated that generally 6-7 mini-fyke nets detected a greater percentage of fish and amphibian species than other gears during most of the seasonal sampling periods. The mini-fyke nets detected larger sized fish and fish across a greater size range regardless of changes in vegetation cover or water depth. However, the detection of unique species, those only detected by one method, varied among taxonomic groups. For example, the unique fish species, including species of conservation concern, were detected with mini-fyke nets; whereas the unique amphibian species were detected by a range of different methods including mini-fyke nets, dipnets, and minnow traps. Other findings showed that the number of fish species detected decreased with increasing distance from shore. The number of amphibian species was negatively associated with water depth. In addition to spatial and temporal variables, wetland hydrologic connectivity and managed water source were the main factors structuring the distribution and richness of fish and amphibian wetland taxa in Missouri floodplain wetlands.

This presentation highlights the results of an aquatic community sampling effort at Duck Creek Conservation that occurred during the month following the historic flooding of 2011. By Frank Nelson. June 12, 2012

The Great Flood of 1993 created 466 new wetlands along the Missouri River floodplain between Kansas City and St. Louis, providing an opportunity to see how wetland dependent species use these newly created habitats. This study focuses on the occupancy and fate of amphibians using new and existing floodplain wetlands after this flood event.

This Science Note shows the catching efficiency of four different gear types among fish and amphibians and highlights some of the research's findings.

This Science Note provides a decision tree to help determine which gear type might work best for a wetland manager's needs to monitor fish and amphibians.

Freshwater wetlands are some of the most imperiled ecosystems on the planet, meaning species that depend on them are at great risk. Master’s Thesis, University of Missouri, Columbia

This study evaluated the efficiency of four different gear types that managers could use to document the aquatic community of fish and amphibians that use managed wetlands as a means to inform decisions.

Science And Management Of River-Floodplain Connectivity For Fish Movement And Recruitment: A Case Study Of A Managed Wetland On The Lower Missouri River. Master’s Thesis, University of Missouri, Columbia

This study looked at the connectivity of the Missouri River at Eagle Bluffs Conservation Area and the amount of fish the moved in and out of the floodplain.

Distribution and Abundance of Anurans in Southeast Missouri

This study focused on frogs and the methodology necessary to detect species richness among forest patches in southeast Missouri.