Evaluation of Neonicotinoid Insecticide Use on MDC Lands 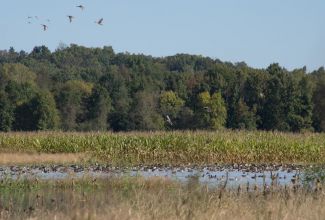 Neonicotinoids are a class of chemical insecticide widely used as pre-planting seed treatments on major agricultural crops such as corn, soybeans, canola, and cereals (e.g., wheat) to control insect agricultural pests. Recently concerns have been raised about the potential immediate and long-term effects of these chemicals on bees and aquatic invertebrates. In addition to toxicity concerns regarding non-target species, these chemicals are relatively water soluble and persistent in soil, raising concern about contamination of surface waters in the vicinity of their use. Widespread occurrence of neonicotinoids in water bodies such as rivers, streams and wetlands has raised questions on what impacts these insecticides may have on non-target ecosystems and organisms. As a result of these concerns, the approved use of these chemicals in agricultural systems is being re-evaluated in countries such as the United States, Canada, and the United Kingdom.
Neonicotinoids are systemic chemicals, meaning the active ingredient is translocated throughout a growing plant, making all parts of the plant toxic to insects that feed on it. As a result, all parts of a treated plant, including nectar and pollen, receive some dose of insecticide which increases the potential of adverse effects on non-target insects.
Given the emerging evidence for potential impacts of neonicotinoids on many types of animals and insects, the MDC initiated several projects to determine 1) if use of neonicotinoid-treated seeds in association with agricultural activities on MDC properties result in concentrations of these insecticides in MDC wetlands at levels that result in ecological impairment, particularly to aquatic invertebrates 2) the prevalence of neonicotinoids in the surrounding landscape and water sources and whether these concentrations on MDC properties could have detrimental effects on aquatic invertebrates, 3) to determine the impact of annual neonicotinoid seed-treatment use on non-target terrestrial insect communities, principally native bees, in Missouri agroecosystems and 4) evaluate impacts of neonicotinoids on native bee nesting efforts, development, and reproductive success among solitary bee communities of agroecosystems.
These studies are being carried out to help to direct future management decisions for planted acreages on Department areas. The Department of Conservation plants approximately 67,000 acres of agricultural crop annually on Department areas to provide optimal production of wildlife food and cover with use of accepted best farm management practices, and are managed to provide the best economic return consistent with resource management objectives. 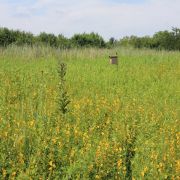 A study to experimentally assess impacts of neonicotinoid seed treatments on development and reproductive success among cavity-nesting solitary bee communities in Missouri agroecosystems. 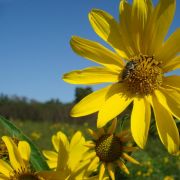 A study to experimentally determine the impacts of neonicotinoid seed-treatment use on non-target native bee abundance and diversity in Missouri agroecosystems. 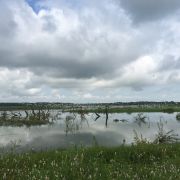 A study to determine the influence of wetland soil saturation period on clothianidin decomposition in soils of different textures collected from a variety of MDC intensively managed wetlands.

Practices for reducing neonicotinoids in aquatic resources: the role of vegetative buffer strips 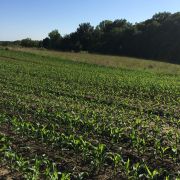 A study to evaluate differences in the transport and sorption of the neonicotinoid imidacloprid within soils collected from grassy vegetative buffer strips (VBS), wooded riparian VBS, and agricultural fields planted to corn/soybean. 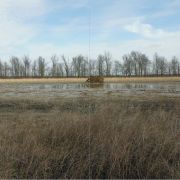 A study to determine if neonicotinoid insecticides are present in Missouri public wetlands at concentrations that may cause harm to beneficial, non-target aquatic invertebrates and other taxa.

An understanding of neonicotinoid sorption and transport in soil is critical for determining and mitigating environmental risk associated with the most widely used class of insecticides. The objective of this study was to evaluate mobility and transport of the neonicotinoid imidacloprid (ICD) in soils collected from cropland, grass vegetative buffer strip (VBS), and riparian VBS soils.
Vadose Zone Journal, 17: 1-12 170139. doi:10.2136/vzj2017.07.0139

Deleterious effects of neonicotinoids on non-target insects and wildlife heightens the need to determine practices that reduce potential for these chemicals to reach aquatic ecosystems through subsurface connections and overland surface runoff. We evaluated whether conservation practices, such as vegetated buffer strips (VBS), could reduce neonicotinoid entry into surface waters and aquatic ecosystems. One of the most commonly used neonicotinoids is imidacloprid (ICD) which first entered the United States markets in 1994. This Science Note focuses on differences in the sorption and transport of imidacloprid within soils collected from grass VBS, riparian VBS, and agricultural fields planted to corn/soybean.
MDC Science Note Vol 14 No 5, 2019.

Throughout the Midwestern US, many public lands set aside for conservation engage in management activities (e.g., agriculture) that may act as stressors on wild bee populations. Several studies have investigated how wild bees respond to large-scale agriculture production; however, there has been limited assessment of how wild bees may be impacted by agricultural activity on public lands or how local variables may influence bee communities in these same areas. In this study, we assessed the abundance and richness of wild bee floral and nesting guilds at 30 agricultural field margins located on five Conservation Areas in Missouri.
Global Ecology and Conservation 17 (2019). DOI:10.1016/j.gecco.2019.e00598

Native bees are in decline as many species are sensitive to habitat loss, climate change, and non-target exposure to synthetic pesticides. Recent laboratory and semi-field assessments of pesticide impacts on bees have focused on neonicotinoid insecticides. However, field studies evaluating influences of neonicotinoid seed treatments on native bee communities of North America are absent from the literature. On four Conservation Areas of Missouri, we sampled row-cropped and reference agricultural fields, and their surrounding field margins for neonicotinoids in soil and non-target vegetation (i.e., native wildflowers). Concurrently, we sampled native bees to assess potential impacts of seed treatment use on local bee populations over time.
Agriculture, Ecosystems and Environment 287 (2020). DOI:10.1016/j.agee.2019.106693

Neonicotinoid insecticides are currently the fastest‐growing and most widely used insecticide class worldwide. Valued for their versatility in application, these insecticides may cause deleterious effects in a range of non‐target (beneficial) arthropods. However, it remains unclear whether strong patterns exist in terms of their major effects, if broad measures of arthropod performance are negatively affected, or whether different functional groups are equally vulnerable. Here, we present a meta‐analysis of 372 observations from 44 field and laboratory studies that describe neonicotinoid effects on 14 arthropod orders across five broad performance measures: abundance, behavior, condition, reproductive success, and survival.
Ecol Appl, 28: 1232-1244. DOI:10.1002/eap.1723

Detections of neonicotinoids in surface waters, including wetlands, has raised concern regarding whether these insecticides might negatively influence non-target aquatic insect communities and, as a result, potentially disrupt aquatic food webs. Although some studies have found that soil microbes play an important role in neonicotinoid degradation, anoxic (i.e., absence of oxygen) conditions also appear to be a primary factor affecting CTN half-life in certain soils. Our objective was to evaluate the influence of wetland soil saturation on CTN decomposition in soils of different textures collected from Missouri Department of Conservation (MDC) intensively-managed wetlands.
MDC Science Note Vol 14 No 8, 2019.

Neonicotinoid insecticides were introduced in the late 1990s and rapidly experienced wide-spread usage, due in part to their prophylactic use as an agricultural seed treatment. Physicochemical properties (e.g., high water solubility, long half-lives) of neonicotinoids enhance their environmental mobility which has led to detections in global surface waters and wetlands. Deleterious effects of neonicotinoids on non-target insects and wildlife emphasizes the need to determine management practices and environmental conditions that inhibit neonicotinoid mobility through soil.Understanding CTN sorption (the process by which compounds are removed from solution to a solid phase) to wetland soils provides an indication as to whether the chemical is likely to remain mobile and more bioavailable in the environment.
MDC Science Note Vol 14 No 7, 2019.