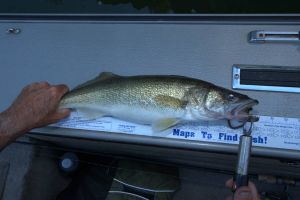 Genetic analyses conducted over 15 years ago provided critical information that informed management plans: the Black and Current Rivers in Southeast Missouri harbor a unique strain of walleye (hereafter, the Black River strain) and past stocking of non-native walleye in these systems may have degraded the genetic integrity of this endemic fish. Using DNA sequences, we first confirmed the highly unique status of Black River walleye and their placement within the larger Eastern Highland group of walleye which is distributed across the western Appalachians. Approximately 10% of walleye captured for broodstock in the Current and Black Rivers each year did not possess a genetic marker characteristic of the maternal lineage of the Black River strain. Walleye that did not possess that marker were not spawned but were returned to the system. Using nuclear markers, inherited from both the mother and father, we found that only 1 out of 73 fish that possessed the maternal lineage marker used for screening was actually a hybrid of the Black River strain and the more common Northern strain. This indicates that genetic screening and management likely helped to maintain the genetic integrity of the Black River walleye. Management to preserve the genetic integrity of Black River walleye helps ensure this unique type of walleye will persist, it conserves genetic diversity at the species level, and it protects aquatic biodiversity as a whole.

Group:  This is a closed group. Only a group administrator can add you. Groups audience:  Resource Science Fisheries